skip to main | skip to sidebar

Posted by Heretheatre at 1:17 PM No comments:

A reading of 'Topsy',  a new play by Kit Lazaroo, will be part of the Searchlight Festival at fortyfive downstairs on Saturday 7th February 2009 at 5pm. Kit received her second RE Ross Award for 'Topsy' in 2007. Georgina Capper, Colin James, Carole Patullo and Alex Pinder will read  a 30 minute excerpt in a program of three new plays curated by Peta Tait: 'Topsy' by Kit Lazaroo, 'Good' by Peta Tait and 'Audrey Hepburn and I Consider our Assets', by Gaylene Carbis.
Tickets: $15/$12
Bookings: (03) 9662 9966 or www.fortyfivedownstairs.com/tickets.php
Posted by Heretheatre at 12:46 PM No comments:

The Time is not yet Ripe

My policy does not propose in any way to vaccinate the community against the complaint called joy.”

Set on the eve of a federal election in Federation era Melbourne, The Time is not yet Ripe tells the story of Doris Quiverton, daughter of the Prime Minister, and her fiancée, Sydney Barrett, socialist candidate for the seat of Wombat.

When Doris and Sydney end up running for the same seat for opposing parties, they are forced to choose between love and political ideals, personal happiness or the greater good of Australian society.

Written in 1912 by ‘The Father of Australian Theatre’, The Time is not yet Ripe sparkles with verve and wit. Featuring an outstanding cast and performed in the new Studio One at the Northcote Town Hall, this crisp version of Esson’s rarely produced classic will surprise contemporary audiences with its relevance, its deflation of the pompous, and its references to ‘practical politics’ and sedition laws.

Don’t miss this rare opportunity to see Louis Esson’s delightful and acerbic political satire brought to life. Practical politics, sedition laws, the vague ideology of the left and the stultification of the right all get a hammering by one of our most famous early playwrights. Featuring Glynis Angell, Georgina Capper, Grant Cartwright, Jonathan Dyer, Kurt Geyer, Ming-Zhu Hii, Carly Schrever, Tim Stitz and Jeremiah Tickell.

Posted by Heretheatre at 7:01 PM No comments:

Letters from Animals The Store Room ran from Nov9-25 2008

Letters from Animals is a parable set one hundred years in the future, in the aftermath of an environmental catastrophe. The river is rising, breaking its banks, seeping into the concrete engineered world of The Development. Animals have been exterminated, and all memory of them is forbidden in this clean new world. The few animals that remain have formed a resistance movement and haunt the populace, waiting on the fringes to be called back into being, sending messages, plotting and dreaming of the day when humans will remember them, allowing them their lawful assembly. 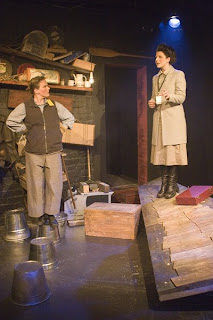 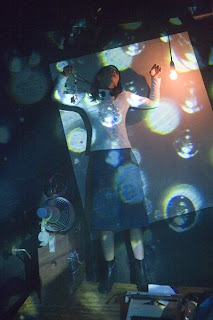 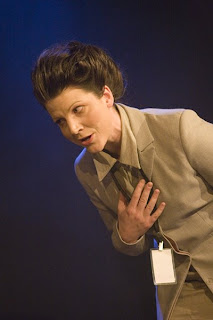 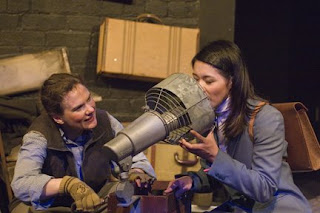 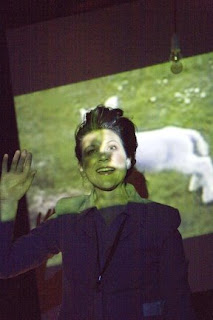 Posted by Heretheatre at 2:56 PM 2 comments: 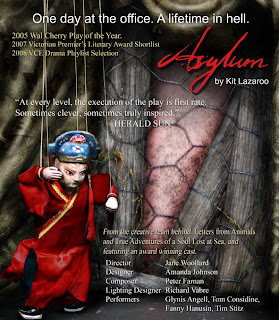 Synopsis: Lally Black is a psychiatrist worried she lacks the compassion for her job. Her efforts double when Yu Siying enters her office, deftly searching for a way in to Lally’s heart. It is 1993 and the four year protection visa bestowed upon Chinese students by the Australian government is soon to expire. Siying is a Chinese woman who has caught HIV in Australia. Afraid of China’s judgment, Siying has one last chance to claim asylum, and believes Lally is the key to her appeal. Siying’s intrusion opens the way for apparitions to infiltrate Lally’s porous inner world: the sinister Mr Dando of Immigration, and Siying’s beleaguered family in China, complete with spies. Lally’s reclusive brother Smudge is mesmerized and galvanized by Siying, opening more rifts in Lally’s world. Lally becomes enmeshed by an imagined China unfolding between herself and Siying, laying bare the threads that run between complacency and brutality. 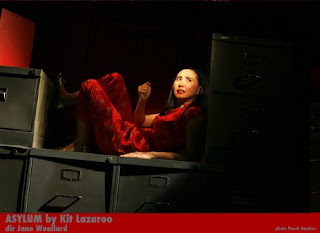 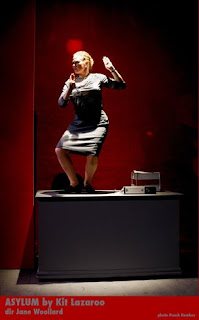 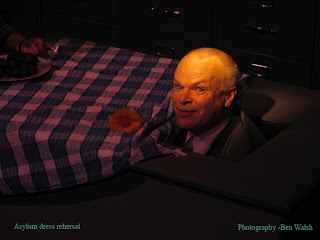 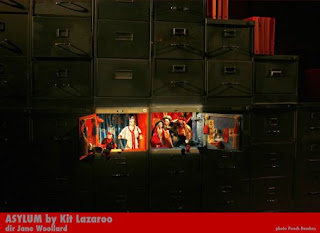 Posted by Heretheatre at 2:20 PM No comments:

True adventures of a Soul Lost at Sea 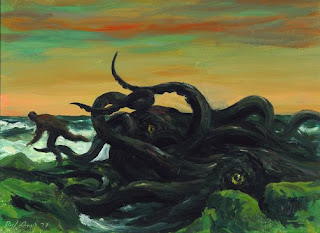 In a remote coastal town in 1850, young motherless Olley Fletcher is discovered washed up on the shore. She and her fisherman father York went missing in a storm some weeks before and she claims to have no memory of this event. She is taken in by the kindly policeman Dougal Morris who does not press her for details - his wife Dido however is itching after facts, and when the corpse of York Fletcher is caught in a net she insists that an autopsy be ordered. Olley now recalls that her father was killed by a giant squid, who took her underwater for the remainder of her absence. When Dido heaps scorn on this account, Olley gives birth to a child which is half human and half squid.

'...combines factual accuracy with a sense of magic and imaginative daring.' Helen Thomson, The Age, 8 Dec 2004 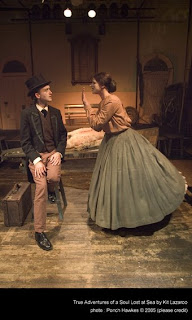 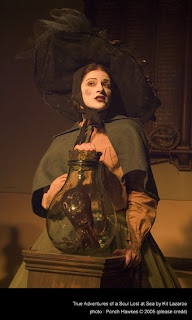 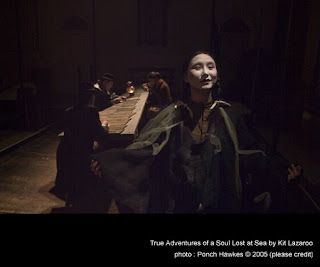 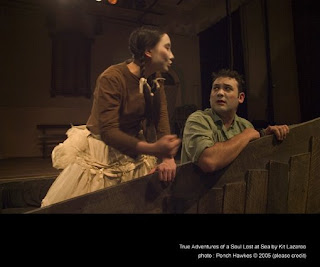 
Posted by Heretheatre at 11:32 AM No comments: